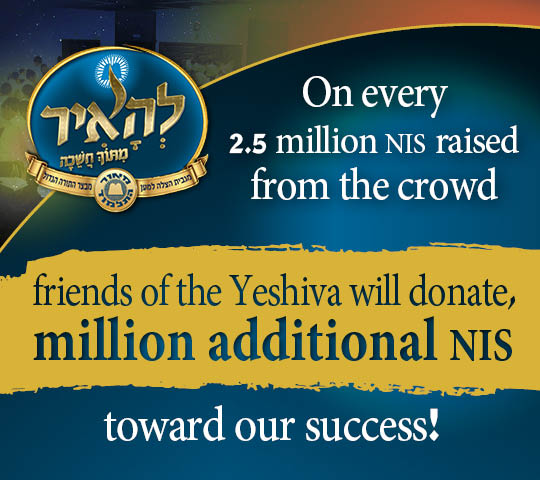 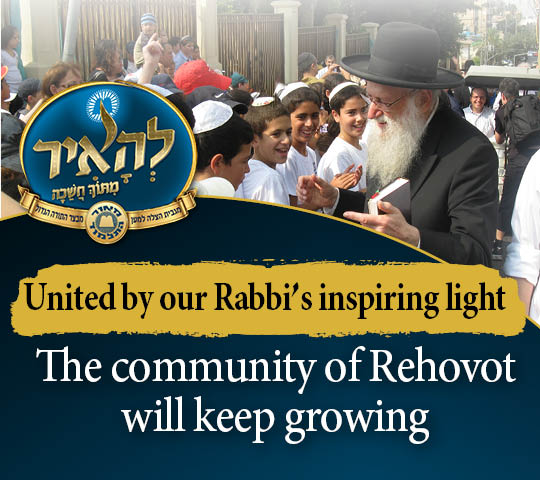 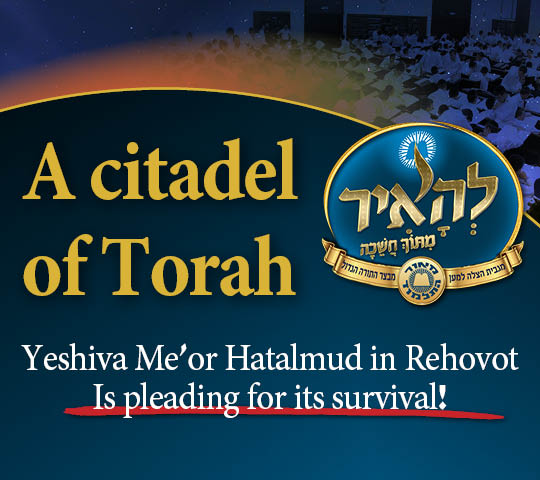 On every 2.5 million NIS raised from the crowd, friends of the Yeshiva will donate 1 million additional NIS toward our success!

Rehovot is a beautiful city, with its many residents enjoying a relatively calm and contented life. The people in the city, whether they are secular or religious, are generally friendly and get along with each other. But all of this would not have been possible without its Chief Rabbi, Rav Simcha Hacohen Kook Shlita and the Yeshiva which he began, Yeshivas Meor Hatalmud.

When Rav Kook became the Chief Rabbi of Rehovot over 45 years ago, only 12 percent of the city's children were attending religious schools and today b"h there is over 50%. The number of stores closed on Shabbos could be counted on the fingers of one hand and today even the big famous Shopping Mall is closed on Shabbos.

Rav Kook was determined to improve the spiritual level of the city as a whole, and he did so by various means. First of all, the Rav made it clear that he cared about all the residents, secular and religious. His warm and heartfelt words made inroads into the hearts of one and all. Rav Kook, a gifted speaker, graced any ceremony with his presence, no matter the audience. He was welcomed into every school in Rehovot, where he would speak to the students according to their level.

However, Rav Kook's most far reaching contribution to the spiritual level of the city was the establishment of the Yeshiva Meor Hatalmud. In fact, one of the first things Rav Kook did in his new role was to establish the yeshiva together with the Roshei Yeshiva Rav Avrohom Yitzchok Kook Shelita and Rav Chaim Zelivansky zt"l.

The Rav was sure that the only way to have an impact on the city was to open a yeshiva that would serve as its spiritual dynamo.

Yeshivas Meor Hatalmud started in 1978 with just 20 talmidim. Today the Yeshiva has 500 talmidim, including a thriving Kollel, and it serves as a spiritual center for the entire city, as Rav Kook had foreseen many years earlier.

Moron Harav Chaim Kanievsky Shelita very rarely takes off from his busy schedule to visit Yeshivos, made an exception when he visited Meor Hatalmud. This is not only because he was impressed with the high level of Torah scholarship, but mainly because of the major influence that the Yeshiva has on the entire city.  The letter that he wrote then encouraging everyone to help the Yeshiva financially shows how dear the Yeshiva Meor Hatalmud is to him personally.

The Rav of the city, shlita, to whom all Gedolei Yisrael accord great respect  carries this impossible burden of supporting the yeshivah and helping it thrive. At his advanced age, it is hard for him to travel abroad frequently to solicit funds from friends and donors.

In a heartfelt letter, written with tears and pleas, the Rav of the city, shlita, pleads with us to help save his lifework, to save the yeshivah from the debts that give him no peace, to help his lifework that is managed with so much effort and dedication by Rebbetzin Zelivanski, tichyeh, the wife of the late Rosh Yeshiva.