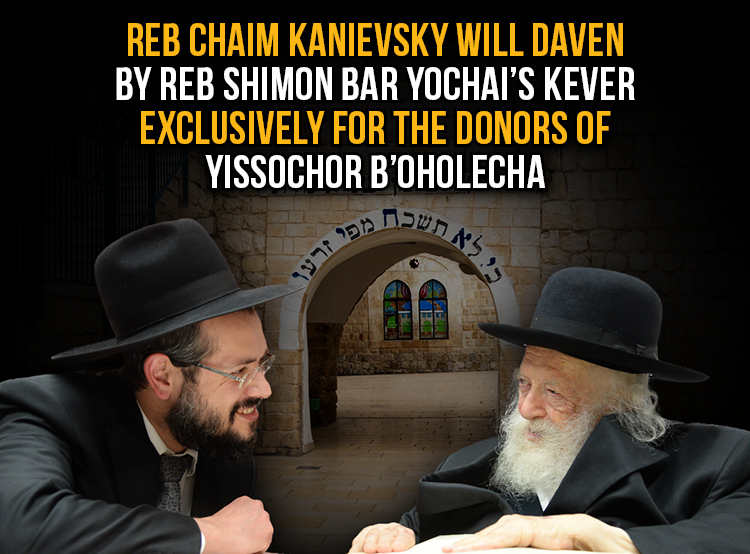 Everyone has something that’s precious, something that he holds dear to his heart. A value that is deeply meaningful, that he’ll give anything in order to preserve.

And if there’s one value that we all share, it’s limud Torah.

We all salute limud Torah—and the lomdei Torah who learn lishmah, with love and purity, without thoughts of status, profit, honor or position, because we’re all aware that such limud Torah is the pillar that supports and sustains our world. There is no one more precious to Hakadosh Baruch Hu than His lomdei Torah, His children.

We invite you to join us for a brief tour of one of the 36 kollels belonging to the Yissachar B’Oholecha Kollel Network that span the borders of Eretz Yisrael.

The name Yissachar B’Oholecha perfectly encapsulates its essence and goals: Its members are, indeed, the bnei Yissachar of our generation, the ones who bear the torch of his Torah lishmah, perpetuating the sacred legacy of Yissachar who inclined his shoulder to accept the burden of Hashem’s Torah with love. Learning in the kollels are young avreichim, barely twenty years old, sitting and shteiging, enthusiastically discoursing in the intricacies of Chulin and Bava Basra beside men nearly twice their age! With sparkling eyes and fiery voices, they thrash out a point in the Pri Megadim, and observing them, one has the feeling that for them—they are battling for their very existence!

It’s amazing to behold. Every morning, every afternoon. Bright and early, they rise for Shacharis and hasten home to bring the baby to the babysitter or the little ones to preschool, and from there, straight to kollel! Minutes after completing the morning rush, they’re settled on the bench in the beis medrash, utterly absorbed in a world that is all Torah. The distractions and worries of daily life—from the grocery bills to repairing the broken appliance—melt away, remaining outside the walls of the beis medrash as they dive headfirst into the oceanic depths of Life itself.

These men are the princes of our nation, bearers of the flame, the ones whom we admire and honor.

We could end our soliloquy here, but we can’t just yet. We must on—in more ways than one.

Because this stirring depiction of limud Torah at its loftiest may not continue. The legendary Yissachar B’Oholecha Kollel Network is in grave danger, on the brink of closing due to dire lack of funding. Its closure will result in the unfathomable loss of 36 kollels, leaving 1,786 diligent avreichim who until now have been supported by the Kollel Network without a framework of learning…

Fifteen years ago, Maran Rosh HaYeshivah Hagaon Harav Aharon Leib Steinman, ztvk”l, entrusted his faithful talmid Hagaon Harav Elchanan Weisbord, shlit”a, with the enormous responsibility of founding a network of kollels that would enable hundreds, and eventually close to 2,000 avreichim, to learn with peace of mind. Since that day, Rav Weisbord has spent the years journeying across the globe to raise the requisite funds to support the swiftly-expanding network, which before long, encompassed 36 kollels in cities throughout Eretz Yisrael. Until a year-and-a-half ago, he was remarkably successful, and with manifest miracles, Yissachar B’Oholecha flourished beyond all expectations. Yet in the past eighteen months, the burden has grown heavy, practically choking. As income from donations sharply declined, the deficit soared and debts quickly accumulated, preventing the Network Administration from paying stipends to its beloved avreichim, many of whom rely on this modest income for bread and milk!

As a direct result of the Kollel Network’s financial crisis, many avreichim have not received stipends for 17 months, and if the status quo continues, there is no hope for the future either.

Upon the direct instruction of the gadol hador, and as a final resort to preserve the Kollel Network, Yissochor B’Oholecha is launching an Emergency Campaign—its last hope of saving this magnificent empire of Torah. If, chas v’shalom, the campaign fails, Yissachar B’Oholecha Kollel Network which supports 1,786 avreichim talmidei chachamim, will be forced to close its doors permanently.

It’s up to us! We know it’s not easy, and that Yissochor B’Oholecha is not the first, and presumably, not the last institution to appeal to you for help. But now that you’ve reached the end of this letter, take an extra minute to reread its lines and reflect upon these noble avreichim, their wives and children, who dedicate their lives to Torah. We can’t let them down! We can’t stand idly by as their makom Torah closes! Right now, every shekel or dollar that you donate to Yissachar B’Oholecha is doubled! When you give one hundred, Yissachar B’Oholecha receives two hundred!

Our Torah itself beseeches you! Please partner with all of Klal Yisrael to save Yissochor B’Oholecha!

Will this sacred campaign rekindle the flame of Yissochor B’Oholecha, restore the spark of hope and joy to the eyes of the avreichim and their families, and enable these dedicated talmidei chachamim to continue spreading the light of Torah?