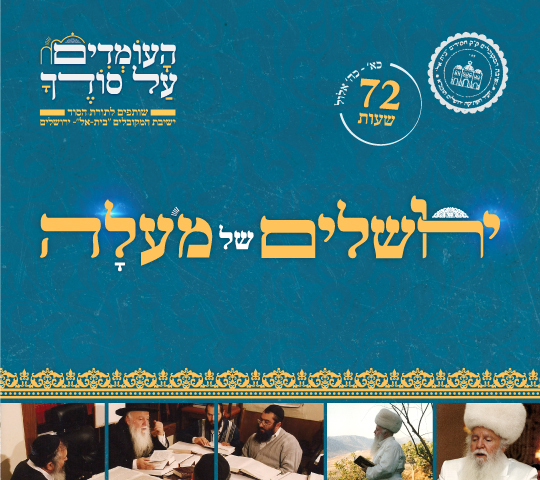 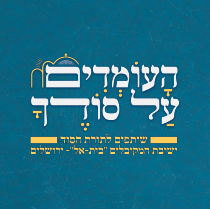 Yeshivat Bet El – the renowned yeshiva of Mekubalim – is the oldest yeshiva currently in existence in the Jewish world. This sacred institution lights up the celestial Jerusalem landscape, casting its precious glow on our entire nation.

Founded close to three hundred years ago, by the saintly Mekubal Rav Gedaliah Hayoun ztvk”l, the yeshiva was the place where many of our greatest gedolim sat and studied the mystical secrets of the Torah, including the saintly Rashash, the Ohr Hachaim HaKadosh, the Chida and the Maharit Algazi, to name but a few. Sages of more recent times studied here, too - such as the Baba Sali and Rav Kaduri, zt”l.

After the Jewish residents of the Old city were exiled in the War of Independence, the yeshiva was established anew by Rav Ovadiah Hadaya zt”l in the Mekor Baruch neighborhood of Jerusalem. Following the Old City’s liberation in the Six-Day War, the yeshiva was re-opened in its original location by the Mekubal Rav Meir Yehuda Getz, zt”l.

Rav Getz devoted himself entirely to the yeshiva’s revival, and it quickly became a nerve center for the study of Kabbalah, both in Israel and abroad.

The Rav paved a unique way in learning and understanding the teachings of the Arizal and the Rashash, and his approach is adhered to by the yeshiva’s students to this day.

With the passing of Rav Getz, 25 years ago, the Rav and Gaon, Rav Yisrael Avichai took over the leadership of the yeshiva, where he continues to disseminate his Rav’s Torah and legacy with a passion.

The learners of Yeshivas Bet-El grow into mekubalim who are well-versed in the mystical secrets of the Torah. Dozens of Talmidei Chachamim, who are knowledgeable in both the revealed and concealed aspects of Torah, study diligently in holiness and purity, practicing lofty kavanot  and effecting profound tikkunim.

The Avreichim come from all kinds of Jewish backgrounds and study in a friendly atmosphere.  Their one desire is to grow in Torah and become holy. There, between the yeshiva’s four walls, they grow ever closer to their goal, day after day; hour after hour. The Torah gems that are discovered at the Bet-El yeshiva sparkle with an awesome light, and send dazzling rays of influence far beyond the physical constraints of the yeshiva.

Rabbanim and Mekubalim from all over the Jewish world feel a deep affection and admiration towards the yeshiva and its Torah sages. For them, the yeshiva is a blazing torch that leads the way for all those who study and protect the mystical teachings of the Torah.

The yeshiva is currently marking 25 years since the passing of the saintly Mekubal who was behind the yeshiva’s revival: Rav Meir Yehuda Getz zt”l.

In the spirit of his far-reaching vision, the yeshiva’s Rabbanim and devoted staff are doing everything in their power to bring it to fruition, so that the Torah studied in the yeshiva can spread as far as possible.

Honoring a quarter century to the passing of Rav Getz, the yeshiva is now holding a special campaign which will allow the yeshiva to remain open, while meeting the growing demands for its expansion.

As we approach the days of judgement and forgiveness, this is your opportunity to be part of the Torah and Tefillah in the oldest yeshiva in the world.

When you donate to Yeshivat HaMekubalim, Bet-El, you are the creator of one more link in the chain that reaches back through so many generations.

With your donation, you gain an eternal share in the Torah that is studied in the same Beit Medrash where the Rashash, the Ohr HaChaim and many other Torah giants of Jerusalem sat and learned.

With your donation, you gain the merits of the Torah and Tefillah of the Mekubalim who perfect the world with their service and lighten up the place that is so close to the Holy of Holies.

Donate to Yeshivat Hamekubalim Bet-El and become an eternal partner to the eternal Torah of an eternal yeshiva.