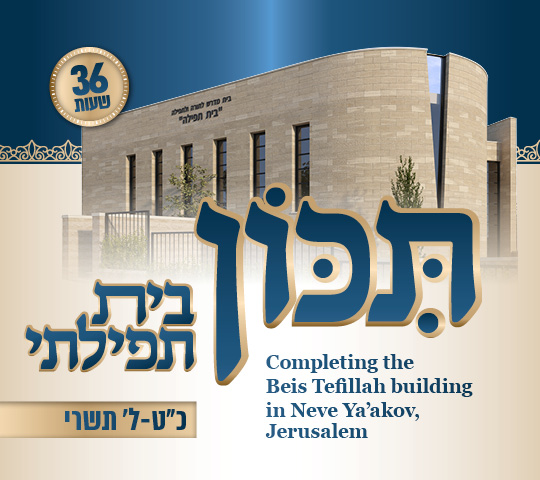 Beis Tefillah was established 13 years ago by a group of Avreichim who moved to the Neve Ya'akov neighborhood. Since then, the Haredi community in that part of the neighborhood has grown and become a drawing point for hundreds of Torah families.

With the growth and prosperity of the community, the need and demand for the Shul has increased greatly, so that over time the synagogue moved from the shelter where it initially operated, to a caravan and later to a temporary building at the end of a neighborhood parking lot.

This solution was also outgrown, following the blessed growth of the community, and about four years ago the Shul received a lot to build on permanently in the vicinity.

Immediately after the allotment, members of the community mobilized and took on huge financial commitments in order to build a Shul to serve as a place for Davening and learning .
B”H the initiative was a great success and today, a year after the tractors hit the ground, the outer construction of the Shul stands complete, requiring only internal finishing.

The cost of the finishing amounts to close to one million shekels, an amount that the members of the community cannot pay after each has already committed tens of thousands of shekels for the building.

With the building already standing - what remains is the final push to help inaugurate the Shul as early as Hanukkah.

In order to raise the remaining amount, the members of the community have launched a special fundraiser in which everyone has the opportunity to contribute to that final fisnishing of the building and become an eternal partner in the Torah, Tefillios and Chessed that take place within its walls.

Contribute now to the completion of the construction and be the final builder of a magnificent Beis Tefillah in the heart of the Neve Ya’akov - Jerusalem neighborhood. 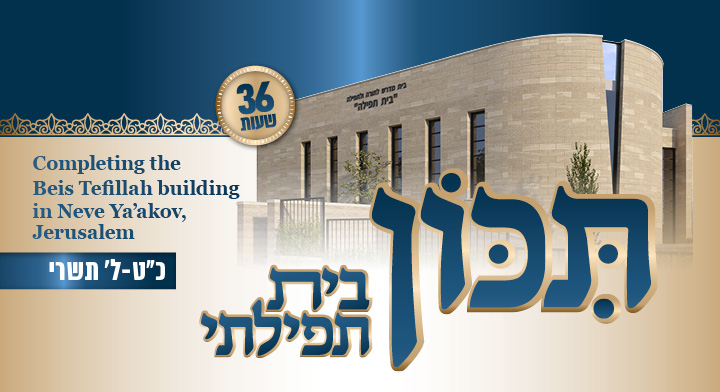