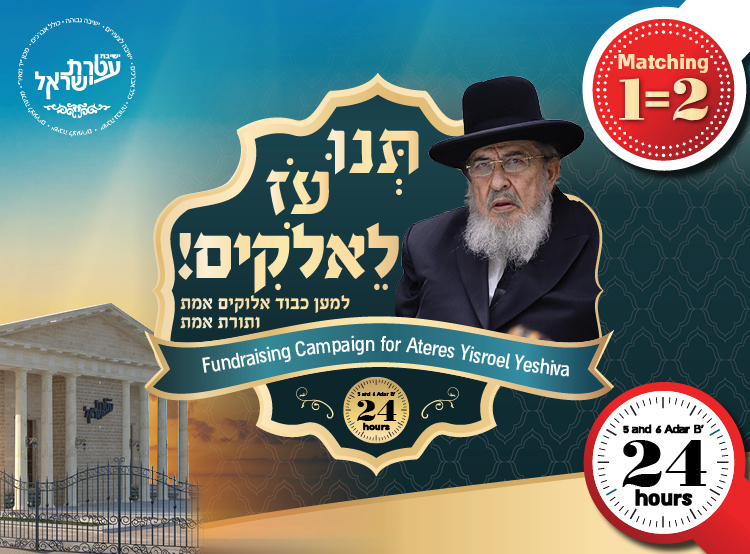 Sorry, couldn't find anyone by that name :(
Loading donors...
דש

…the Torah Kingdom that has become a shining crown in the growing and reviving World of Torah in the Holy Land.
Standing at the head like an admirable, fearless military commander, is the conductor and creator of this realm of Torah, member of the Moetzes Gedolei Hatora, Maran the Rosh Yeshiva, the great Gaon, Harav Baruch Mordechai Ezrachi, shlit"a, one of the maatikei shmua, bearers of tradition, in our generation.
Like a steadfast bridge linking generations, Maran the Rosh Yeshiva, connects Slobodka and the Kingdom of the 'Sabba" with our generation, the generation of the building of the Torah World in the Holy Land. Maran the Rosh Yeshiva weaves together the teachings of "Knesset Yisroel", Radin and Kovno with a force and vision unparalleled in the previous generation.
This is the Torah might of one commander, a commander who sees tens of thousands of Hashem's servants and keepers of His mitzvos in his mind's eye, tens of thousands of bnei aliya having the loftiness of a ben yeshiva and being worthy of being called "Man", thousands for whom he has placed his life, his world and his Torah on the line.

With phenomenal strength, he lights the flame in the hearts of thousands of youth who are light years away from anything connected to Torah, lighting a spark and turning it into a tremendous blaze of Torah and yira.
With Torah genius and lofty leadership, Maran the Rosh Yeshiva shlita leads troop after troop of toilers and builders of Torah, all bearing his trademark stamp of spiritual Torah stature and travel on a journey of choice and yira in one's Way of Life.
It's difficult to picture the World of 5779 without the spiritual impact and genius leadership of the Rosh Yeshiva, shlita. The planting of aspiration to greatness in Torah, the deep clear-headed thinking, the strengthening of emunas chachamim and the obligation to obey,--Maran shouldered all these with unfathomable strength, from the depths of his soul. All these fashioned a new generation of loftiness, height and resolute connection to Torah and to toil in Torah.

His great kingdom, the amazing forge that stands at the mizrach wall of the Torah world—the Ateres Yisroel Yeshiva-- has become an astounding place of learning that has produced tens of thousands of lofty individuals who are prodigious in Torah and at the vanguard of the Torah Kingdom.
This great tabernacle of Torah, this wondrous forge, is the vision of the mighty and the story of a generation.
And he himself, Maran Rosh Hayeshiva, shlita, , at the age of ninety, drags himself from place to place, moving painstakingly slow, in order to continue illuminating the entire generation with the light of Torah and the toil of Torah.
Yes, he has concerned himself with the entire world Torah.
Tens of thousands of campers at the 'Bnei Torah' camps that he supported and inspired, thousands of toilers of Torah from within the walls of the Yeshiva that are aflame with desire for Torah, and tens of thousands of bnei torah who have been inspired by his elevated stature in Torah -- all aspire to be elevated spiritually and to ascend to new heights.

As an entire generation we have always followed the path of emunas chachamim, the path of great luminaries, and we now continue to do so.
The work of one man. An angel standing at the head of a road.

come. For 43 years, the kingdom of Ateres Yisroel has been without a place of its own, without a building and without the peace of mind of having a home. From rental to rental… the Sanhedrin had 10 exiles…
and Maran shlita makes effort after effort, drained of energy, depleted,
and the loss is the loss of all of Klal Yisroel.
"His voice is heard upon his coming to the Kodesh"
Klal Yisroel needs this lion amongst us, shlita
with all his strength, with his might…
And he, continuing his awesome toil silently, is collapsing under the burden that would most likely be difficult to bear even for men fifty years younger.
No more!
At this moment, public figures and a steering staff of Yeshiva students and graduates, people of stature, have joined together, following the command of Maranan and Rabanan, Gedolei Yisroel, shlita, to unite and take action!
Helping Maran the Rosh Yeshiva and lifting this impossible burden from him, helping him complete his life mission—the building of the yeshiva complex in Modiin elit, a mishkan Hashem, will grant him, for the first time in 50 years, some peace of mind, as he will no longer need to contend with the monthly struggle to pay rent…
And Maran, shlita will merit the serenity that will enable him to pass on the treasures of Torah, yirah, daas and yiras elokim.
We all owe it to him.
We all owe it to him to lift off his heavy burden.
Not for him, but for ourselves!
So that we may merit to see more Torah and yirah in our generation, `more chinuch and more troops of bnei yeshiva prodigious in Torah.
We owe it to him, for our own sakesI
Give might to Hashem! --For the honor of Hashem and for the dissemination of Torah.
This call demands that we give heart and soul, and do whatever we can for the sake of Kvod Shamayim.

Share with your friends & family!
Tell your story. Why did you donate to Ateret Yisrael?